Today Brian appeared on the Ed Doolan Show on Radio WM to be interviewed about our Gritting Map. Good to get some publicity. There is a recording of the interview courtesy of Russ Philips but the blog technology won’t allow upload of audio files (or I don’t know how to do it). So if you want to listen email the community contact or press contact at the mappa-mercia website. Solihull MBC contacted us with this year’s amendments to gritting routes so that we can update the map, along with their thanks for our public service. Birmingham City Council had done likewise earlier. Walsall’s data is now on our map and within the next few days Wolverhampton should be complete

With the cold weather continuing its been difficult to get out and do the normal level of new mapping so we decided at one of the monthly social meets to do a bit of work that didn’t require much outdoor mapping. Gritting Routes. Birmingham City Council like many other local authorities publish their winter road management plans, including those routes which are strategically important and therefore should be kept clear of snow and ice in the winter. These gritting routes have been added to the OpenStreetMap.org database and a new overlay created from this to add a gritting map to mappa-mercia.org. Solihull has since been added and we are hopeful to add the other West Midlands LA’s data soon too. 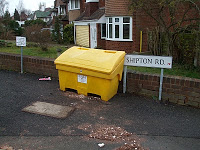 The work hasn’t stopped at gritting routes. The location of grit bins, placed by LA’s at vulnerable locations such as steep hills and schools, especially on roads which are not routinely gritted, needs to be located or verified on the ground. We’ve started to add some to the database and now show on the gritting map when you zoom in and more will appear as they are found and verified. If you have a grit bin on your street why not add it yourself or tells where it is and we will add it for you.

All of this has produced some good publicity for the mappa-mercia project. Birmingham has now added a link to our gritting map from its website and to top it all last week we got a short interview aired on the BBC evening news program Midlands Today plus a post on BBC West Midlands Science and Environment correspondent David Gregory’s blog

Great work to all those who have contributed. 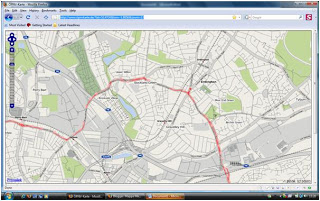 Well I’m well and truly hooked on entering bus routes as relations now I’ve discovered a cool German website that renders bus routes (and all other forms of surface public transport routes). Click here for a browse around.

Two minor problems so far – one, the site’s in German for the map legend but the rendering is great; and two, new edits only appear at zoom level 13 so you look at a bigger map and you only see older edits (don’t know yet what frequency these levels are rendered at, but at level 13 it’s done on a daily basis). The only bus stops that currently get rendered are those with a name tag.

So… I’ve entered lots in SE Birmingham, but avoided the City Centre terminations so far. I’d appreciate some help from the folks in Coventry to get route 900 completed. Anyway the big achievement is to get the whole of the route 11 completed. And no, I haven’t entered two relations one for the clockwise 11C and one for the anticlockwise 11A! It was enough work just doing it once. 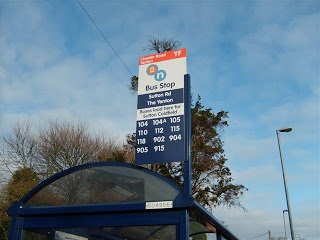 Import of the NaPTAN data for Birmingham has been completed as a trial and we can now start the job of bus stop verification and adding all the bus route information which is not available in the NaPTAN dataset.

Here’s an example of the NaPTAN data merged with our own surveyed data: