If ever you are visiting the city of Lille in northern France take some time out to visit the basement of the Palais des Beaux-Arts, home to fourteen relief maps of  fortified French cities. These intricately detailed maps (really they are scale models and almost works of art in their own right) are a regional collection that was donated to the city of Lille in the 1980s from a larger collection housed in the Hôtel des Invalides military museum in Paris.

Think of them as the seventeenth century equivalent of aerial imagery collected by drones.

The collection was originally commissioned by King Louis XIV  in the 17th century as a military information system but quickly became a demonstration of royal grandeur.  Their building continued until the time of the Emperor Napoleon III and continued the tradition of previous centuries particularly  of the 15th and 16th when they were used by Italian military engineers as an aid to  fortification design. 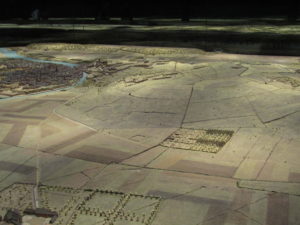 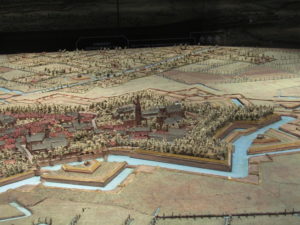 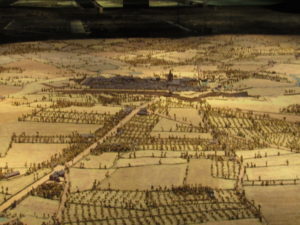 The relief maps are of considerable size – the map of Lille itself is 18 sq m and stretches across ten tables.  And this is all that remains of the original 60 sq m! Generally the maps are of an extent that the viewer is placed at the range of cannon fire into the centre of a city. Naturally as cannon range improved so the maps got larger in extent.

The models were built on to  maps drawn from field surveys which were stuck on to the tables with suitable annotation to let the model builders know what went where. The buildings were made from wooden blocks covered in sheets of decorated paper to depict finishes such as stone, brick, wood, tile and thatch. Much more architectural detail was added to the more important buildings. Gardens and fields were represented with coloured silk and trees from wire wrapped in silk thread. The detail is exquisite. 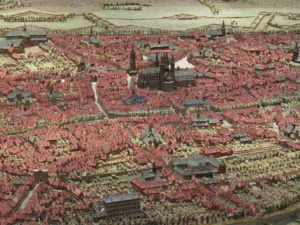 The relief maps have survived the centuries well thanks to loving restorative care and are sensitively displayed and curated. They remain an important part of the history and development of mapping