It’s been fascinating mapping the changes during 2019 for the major junction improvements under way at the Iron Lane junction in East Birmingham; long tolerated by users of the  A4040 Outer Ring Road for generating long waits especially for users of the adjacent Stechford Retail Park and long-suffering passengers on the 11A/11C outer circle bus route. “Pinchpoint” is the official nomenclature for such junctions.

The junction moves from being a signalised gyratory to a junction with two new roundabouts and improvements to north-south flow with a dualled section (involving a new bridge over the River Cole) and a  bypass northbound lane to avoid the new Ring Road roundabout. There also 5 new toucan crossing to be installed. 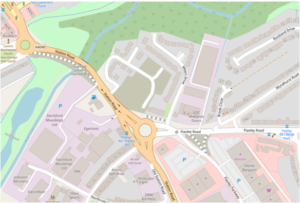 Iron Lane becomes restricted to a road with no addresses, joining the two roundabouts (the current mini-roundabout to the east is only temporary to ease traffic flow whilst the second roundabout is constructed).

Apart from the mapping complexity of keeping up with changes,  what makes this junction so interesting is that the majority of the funding comes from errant motorists caught and fined by Bus Lane enforcement cameras: £7.083m of the total cost of £12.984m. Next time I’m sat fuming on a delayed bus journey because of selfish prats who think BUS LANE doesn’t apply to them, I can feel smug that they’re funding road  improvements.

Iron Lane junction improvements  began in March 2019, and are expected to end in late 2020 with a major step forward on 9th December when a 350 tonne mobile crane made short work of lifting reinforced concrete box beams onto the newly constructed supports across the River Cole. The major roundabout on the A4040 is now open and work has started on the second roundabout for the new entrance to the Stechford Retail Park

But the story doesn’t start with the arrival of the diggers and road cones this year. Birmingham City Council first approved the scheme in March 2015 and preparatory demolition was completed in November 2016 ( I remember removing the Snooker Club from OpenStreetMap).  And the actual roadworks only cost £5.5m in the contract awarded to McPhillips. So why the delay and what cost so much more than the actual construction?

Putting aside the usual struggle to secure funding from an austerity-obsessed government, two main factors dominate:

Firstly the immense volume of documentation required for planning and other statutory requirements such as a 232 page traffic modelling report. To say nothing of the extensive consultation process required. Compulsory Purchase Orders even have to be justified by referral to provisions of the Human Rights Act. All those consultants and surveys take time and money.

Secondly, land acquisition by Compulsory Purchase Orders also eats time and money, especially when landowners’ lawyers get involved. The adjacent retail park is owned  by some tax-avoidance outfit in Luxembourg and the antics of their lawyers as documented by Birmingham City Council on their planning portal would make you howl with laughter if you’re cynically inclined or your blood boil if you have a bit more of a social conscience.

Needless to say only on OpenStreetMap can you see the latest road layout! Come back next year when it’s complete