Last week saw me surveying Ward End Park in Birmingham. This park had had no attention from OSM mappers since it was first surveyed in 2009 and so looked a good candidate for the quarterly project. Aerial Imagery also showed significant detail to be missing (mostly footpaths).

The park is an innner city park close to some economically-stressed neighbourhoods, but shows none of the vandalism you might have expected. It is also unexpectedly litter-free: this either shows it’s a well-respected local amenity or low useage in February means no litter. It is largely just open parkland and grass with only one small flower bed in front of  Ward End Park House: this certainly cuts down on maintenance costs for the Council. The Friends of Ward End Park have a community and schools garden(newly mapped post-survey) adajcent to the house

Birmingham Corporation purchased 43 acres of land in September 1903 and a further 11 acres in November 1903. These were officially opened to the public as Ward End Park on 14 May 1904. Most of the benches are marked 1904-2004 to commemorate the centenary of its opening.

Also newly-mapped is a commemorative plaque on the house the for the construction of the boating pond commissioned in the bad winter of 1908-9 in order to provide work relief  for the unemployed, who excavated 50,000 cubic yards of earth. The house with its graceful architecture is Grade II listed – when first surveyed it was a thriving community centre, now it is sadly boarded up and unoccupied.  There are map records of a house here from 1759, but the current structure probably dates to the late 18th century with additions made in the Victorian period. 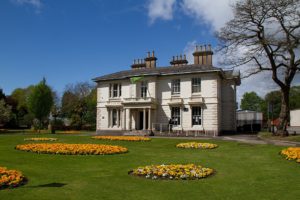 Two crown green bowling pitches have also fallen into disuse since the park’s first appearance in OSM: this is probably not just council austerity, many pitches in pub grounds have also disappeared. Does the decline in number of pitches reflect changing social tastes in leisure patterns, or economic pressures of land development and council austerity? Perhaps there’s some academic or journalistic research out there invesigating this.

Ward End Park has a Sons of Rest Pavilion, again now sadly boarded up and disused. The Sons of Rest movement started in 1927, when a group of ‘Industrial Veterans’ met at Handsworth Park in the north of the city. The first purpose-built building was built in 1930 and the movement expanded to over 3000 members in 29 parks. The purpose of the buildings was to provide social facilities such as snooker and dominoes for “retired gentlemen”. I think this was a movement confined to BIrmingham and the Black Country, but a web search reveals little information except for local press reports about them being burnt by arsonists. I shall do some further research to satisfy my curiousity. Making sure all the surviving Sons of Rest facilities are mapped might be an interesting local project. 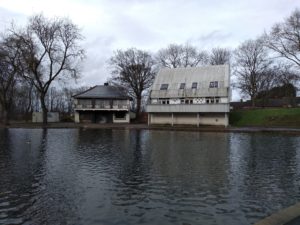 Sons of Rest is on the left, monstrosity on the right courtesy of Birmingham City Council

I also found, and mapped,  two recent artworks. One is a mosaic and the other is a log sculpture of an acorn, made from a single 2.5 ton piece of English Oak from Worcestershire in 2014. 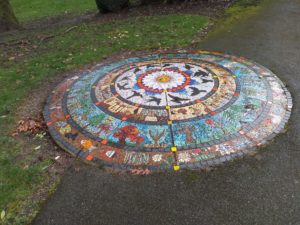 More evidence of social and economic change is the disappearance of the park’s public toilets since the first OSM survey. At least these haven’t just been boarded up and left to decay: the building has been repurposed as a retail unit and is currently occupied by a money transfer business.

The Park is unusual in being formed ot two parcels of land separated by a railway line and joined by a single bridge whose side barriers have been colourfully adorned by local street artists (not vandalistically sprayed with “tags”). I’ve found the bridge on maps dating back to before the park was constructed and it looks like it was for a farm track linking fields. The southern part of the park was not part of the original 1904 park.

So a short 90 minute stroll on a crisp showery early spring day, not only improved OSM’s coverage of this park but revealed some intriguing history and social/economic change. It’s a highly recommended acitivity. Has anyone else been out doing this quarterly project and have something interesting to relate?