Friday saw me on a family visit to Oxford to view the Sheldon Tapestry Map of Worcestershire hanging in the Weston Library (part of the Bodleian Library). It is a magnificent spectacle, being woven in silk and wool, and standing some 4m tall by 6m wide. Although it is assumed that it was woven in Warwickshire at Barcheston, current research throws doubt on this.

The Bodleian Library Map Room is the second largest in the UK and is one of the world’s top ten map collections – so it’s a must-visit for any map  lover.

The tapestry on display is one of  four tapestry-woven maps commissioned in the sixteenth century by Ralph Sheldon, a prominent Midlands landowner, based on the county surveys of Christopher Saxton. Each  tapestry illustrates one of the counties of  Gloucestershire, Worcestershire, Warwickshire and Oxfordshire.  They would have formed a panoramic view of Sheldon’s land when hung in his home in Weston near Long Compton, Warwickshire. The maps are an  important stage in the evolution of cartography.

This tapestry survives in parts only: in fact the only complete one is that of Warwickshire which hangs in the Market Hall Museum in Warwick. You can see what was involved in restoring the tapestry here.

There is an intriguing reference to  an area “whych was dryven downe by the removying of the land” close to a placename of The Worldes End.  The Guardian had a good piece about the tapestry , although the mystery of the “removying of the ground” seems to have been solved – apparently it was a massive landslide. 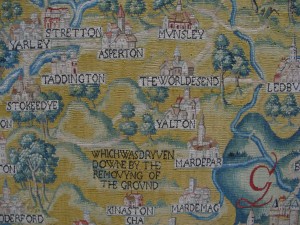 If  you want an in-depth view of the tapestries see this scholarly article.

It’s good to know that mappa mercia is following an ancient tradition of local map-making although I don’t think OpenStreetMap will ever come close to the beauty and craft of the Sheldon Tapestry Maps.