The Current Situation is a collection of work by artist Yara el-Sherbini, whose centrepiece is an interactive sculpture of a map of the world. It is large, 7.8m wide and 3.5m high with steps leading up to the rear. I saw it at its current location in Wolverhampton Art Gallery. I popped in whilst I was surveying some listed buildings (heritage buildings for readers not in the UK).

The work is an impressive sculpture but its true nature is not revealed until the audience engages with it. As you can see from the picture it emulates a children’s game where you have to trace around the object with a metal implement without touching it. Here you trace around the national borders and should you touch one, red lights flash onto the sculpture, buzzers sound and the metal implement in your hand vibrates strongly. Just as in real life, navigating borders becomes a matter of tactics and skill and should you transgress the rules, alarms and shocks await you. 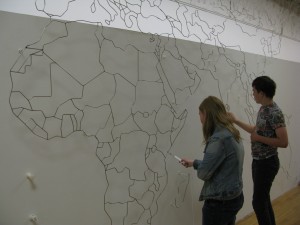 Again as in real life, some people participate and some watch from the sidelines. It’s only when you play that the real dynamic of conflicts, dangers and exploration becomes apparent. What if no-one plays? Then the sculpture just becomes a beautiful metal map of the world, a static monument which might be seen in many public places around the planet, representing a harmonious, static view of a united world, one that is controlled and restricted.

I found it a clever and thoughtful piece which questions the unspoken cultural components and geopolitical struggles present in a map. You can study a map and only see a small representation of its true content. As the exhibition guide says: ” El-Sherbini’s shock tactic speaks to the physical and legislative strategies used by governments to reinforce and control their borders: from walls, barbed wire, electrical fences, manned and unmanned surveillance, to visa restrictions and immigration curbs.”

The collection is on tour nationally so watch out for it