August sees mappamercia celebrate its tenth birthday – can you believe it? We didn’t celebrate with a birthday cake but we did meet in Pershore Worcesteshire on Saturday 6th August at the Pickled Plum pub for lunch between morning and afternoon mapping sessions. It was a glorious English summer’s day and we got lots mapped.

Why did we pick Pershore? Mainly because its postcode of WR10 nicely coincided with our birthday. Maybe we’ll be boxing around Worcester postcodes in August every year as we get older- see you next year in WR11!

We had a good turnout of six people and took the opportunity of getting members’ signatures on the Memorandum of Assocation for OpenStreetMap UK Community Interest Company (this is one of the legal documents required to form a limited company). 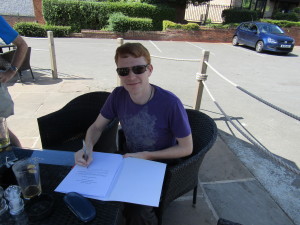