Appropriately 10 of us gathered at 6/8Kafé to celebrate 10 years of OSM. It was satisfying to see that our email campaign of contacting most users who had contributed to OSM in the midlands brought along six people to their first OSM meeting in the Midlands. We had users from Oxford,Worcester, Coventry and Stafford as well as the usual crowd from Birmingham (well….  minus a few notable examples who had very good excuses!) Thanks to everyone who gave up their time to come along,  I think we all gained something from swapping experiences  and tips and tricks for editing and tagging and data sources. Apologies to Steve Coast, our founder, who still has 12 ways in our region showing him as the last editor – we didn’t have the time or resources to invite contributors with this number of edits.

Naturally we had a cake, baked and decorated by Liz. Here’s  a Level 1 aerial image: 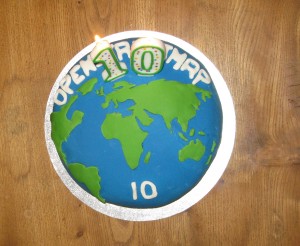 I hope people remember which slice they were allocated- we’ll be expecting some edits!

In true OSM Mapping Party tradition there has to be an image of AFTER: 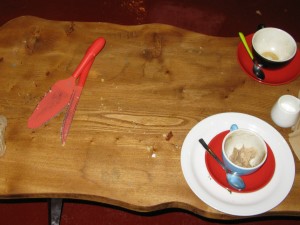 And of course we need to see who turned up: 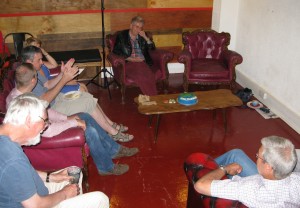 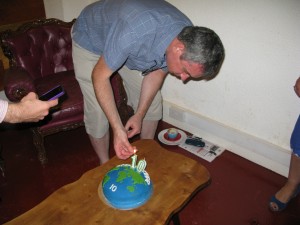 And finally thanks to Sal and her crew at 6/8Kafé  on Temple Row who generously donated a venue for us in their basement. Any OSMers visiting Birmingham, pop in for coffee and cake, you won’t be disappointed – beats the corporate coffee chains hand down.

IF YOU’RE ORGANISING YOUR OWN PARTY –  HAVE FUN