Dudley, in the heart of the Black Country in the West Midands, is not the sort of place you’d envisage a rural walk. The Black Country is so-named for its iron and coal and industrial might. Some  have claimed the furnaces and mines of the Black Country were the basis for JRR Tolkien’s Mordor in Lord of the Rings. Most of the industry has now disappeared and left lots of brownfield sites, crumbling industrial buildings and a struggling economy, with its associated social problems.

I have recently walked, surveyed and mapped the Limestone Walk. And  what a delight it was!  It was easy to forget the adjacent presence of a dense urban environment. The walk is poorly publicised and poorly mapped (the waymarking can be poor in places also). I could find little on the web which could act as a practical guide for anyone wanting to walk this route. The best I found was from the excellent Discovering Britain resource provided by the Royal Geographical Society.

So I thought – here’s an opportunity to demonstrate the capabilities of OpenStreetMap. This is the result of my efforts, taken from Lonvia’s Waymarked Trails 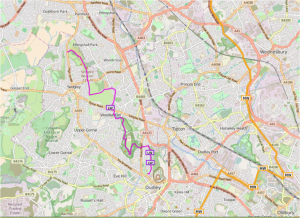 The walk commences at the ruins of Dudley’s mediaeval Priory and ascends Castle Hill (unfortunately Dudley Castle and its zoo are a paying attraction so the walk has to avoid them). Castle Hill is riddled with collapsed limestone mines and also with canal tunnels. A small diversion to the Black Country Living Museum is well worth the effort: it provides an extensive depiction of the industrial and social history of the Black Country.

But the jewel in the crown of the walk has to be its passage through the Wren’s Nest National Nature Reserve. It has been a national nature reserve since 1956 and there is currently a bid to place it in  wider regional GeoPark. It is world famous geologically for its well-preserved Silurian coral reef fossils and is one of the most diverse and abundant fossil site in the British Isles.  It is also famous historically for here it was  that the Scottish palaeontologist Sir Roderick Murchison studied the fossils and rock formations that led to him defining the Silurian System.

The crater Murchison on the Moon and at least fifteen geographical locations on Earth are named after him. These include: Mount Murchison in the Mountaineer Range, Antarctica; Mount Murchison, just west of Squamish, British Columbia, Canada; tiny Murchison Island in the Queen Charlotte Islands in the same province; Murchison Falls (Uganda); and the Murchison River in Western Australia. The town of Murchison in the Tasman Region of New Zealand’s South Island was also named after him. It would be interesting to discover how many of these are mapped in OpenStreetMap.

The walk culminates on Sedgley Hill.  At 277m, reputedly the next highest point East is in the Ural Mountains. There are stunning views over much of the West Midlands, Staffordshire and Worcestershire; Birmingham’s city centre with its cluster of tall buildings can be seen in the distance squatting as it does on a low ridge.

Dudly Council, under severe financial pressure, is doing it best to improve the infrastructure of the walk and to promote its use.I hope OpenStreetMap’s resource can be of use to them.