This month on Thursday October 2nd we were lucky to be invited to present the local work of OpenStreetMap to the Beacon Roads Cycling Club at Rednal Social Club. BRCC is active in South Birmingham and Worcestershire, with about 150 members and is a long-established club.

Andy (Blackadder) gave a thorough presentation both on OSM and reviewing the tracking/navigation tools available to cyclists. Most BRCC members currently use Strava and there was a great appreciation of the  value of OpenStreetMap which powers many of the cycling tools. Andy’s estimation of his presentation time was blown out of the window as he had to answer so many questions and comments! 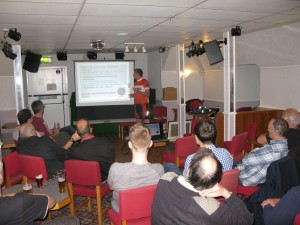 BRCC members generally felt that the cycling-specific tagging schema for entering OSM data seemed to be more orientated to urban cycling and they’d like to see tagging that was more orientated towards rural club cycling that didn’t confine itself to NCN routes.

They were very concerned that there was currently no way to alert cyclists to  hazards.  There is alocal stretch of NCN Regional route 55 , Icknield Street, that they  always avoids on club rides so dangerous do they consider it to be.  There and then we edited the stretch with two new tags: cycle_hazard=yes  and paving_quality=poor.

Thanks to the Beacon Roads Cycling Club for their hospitality and interest. Hopefully in the coming months BRCC members will add their considerable knowledge of the area to OpenStreetMap.